Intermetal Motor contributes constructively to the success of the Artes Group 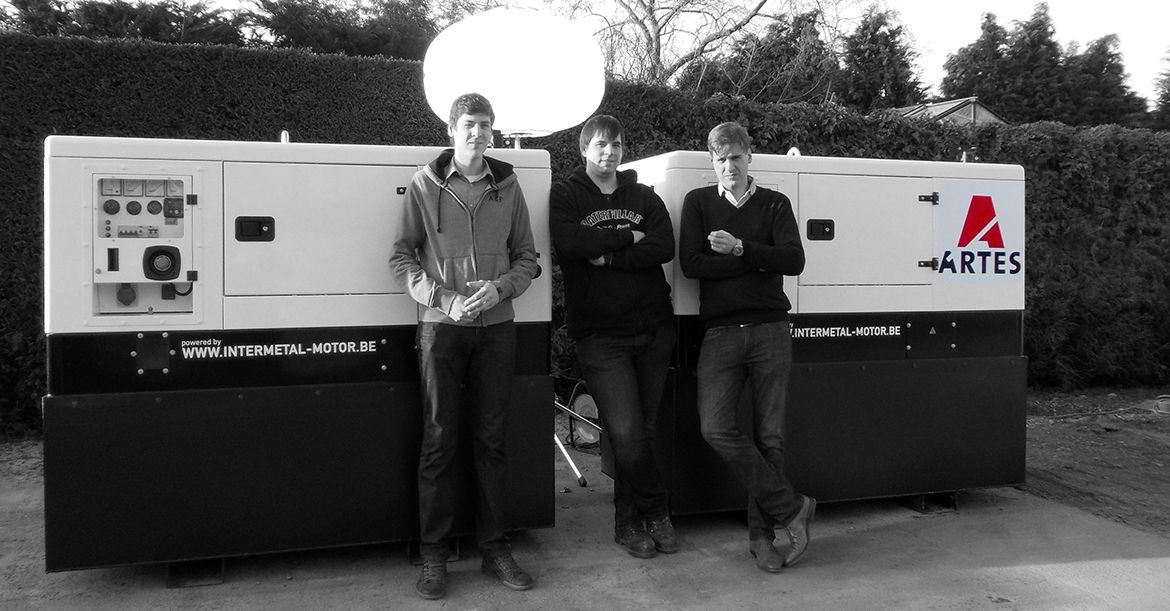 Intermetal Motor contributes constructively to the success of the Artes Group

With the launch of the “Constructive people” slogan, the Artes Group last year creatively declared the driving force behind its success. The real building blocks, according to the group, are not the bricks, but our employees. That philosophy now consistently pervades the engineering consultancies, subcontractors and other suppliers engaged by the construction group.

For many years now, Intermetal Motor has been selling and renting out generators and lighting systems to Artes Depret. Artes Depret is one of the contracting companies in the Artes Group and is primarily engaged in buildings, civil construction and waterworks. “We are active in East and West Flanders and the north of France”, said Tom De Clippeleir, Materials Officer in Artes Depret. “The group is active all over Belgium through other subsidiaries. Artes also has a prefab production department and a company that specialises in restoration work. People will know us everywhere due to our infrastructure work. All but two of the tunnels on the Bruges ring road, for example, have been constructed by us. The last one was the one in the Kinepolis complex.”

Energy supply is an important aspect of such large construction sites. Artes Depret has 15 generators of its own, and maintains its own technical team for maintenance work and repairs of machines, major repair jobs and urgent interventions, and whenever its own technical team cannot be present, they call Intermetal Motor.

“The advantage of Intermetal Motor is that they get on the job very quickly. Whenever we require an intervention, our problem is resolved within two or three hours.”

“Most of the machines have been bought from them and whenever we fall short of capacity, we hire additional generators”, explains Tom Clippeleir. “The advantage of Intermetal Motor is that they get on the job very quickly. Whenever we require an intervention, our problem is resolved within two or three hours.

This is crucially important to us – a work site that shuts down loses a lot of money. We can always rely on them even to shift machines, or to make modifications to the cabling or to the distribution boxes.” Intermetal Motor has always believed in and remained fully committed to a philosophy characterised by constructive thinking and cooperation with the client.

At the end of February, three light balloons and two 20 KVA generators were supplied to Artes Depret. The generators were constructed entirely according to the customer’s specifications: 1000 litre tank, C-curve fuses, oil level protection and even painting with company colours and group lettering.

Light distribution without the blinding effect

Artes Depret also relies on Intermetal Motor for lighting solutions as well. The company uses high-mast lighting on the work site and has in the meanwhile also acquired experience of using the new light balloons. These are systems in which the light source is placed inside a balloon, ensuring excellent light distribution without the blinding effect that is a characteristic of spot lamps.

“They of course have their advantages and disadvantages”, says Tom De Clippeleir. “The most suitable solution really depends on the application. On a work site, where we can put up high-mast lighting in a corner, we would prefer to use a spot lamp because ultimately it provides brighter light in the places where it is directed. If there is a risk of blinding, we can avoid this by using light balloons. In road works, we must of course avoid unsafe situations caused by drivers being blinded. This is where using light balloons would provide a clear added value. A light balloon placed in the centre would also be better in case of work sites where a number of people are simultaneously working at various locations.